Twitter announced that it will begin to add warning messages and labels to tweets spreading disputed or misleading information about COVID-19. The labels will direct users reading these tweets to a Twitter-curated page or to external resources that offer additional information and context about the claims being made in the tweet. The warnings, meanwhile, will cover the tweet — requiring an extra click to view the content.

According to the screenshots Twitter published, tweets sharing potentially harmful, misleading information will be labeled with a link that reads “Get the facts about COVID-19.” This link will be preceded by an icon of an exclamation mark in a circle in order to draw the user’s attention.

In these cases, the tweet itself is covered up by a warning that reads:

“Some or all of the content shared in this Tweet conflicts with guidance from public health experts regarding COVID-19. Learn more.”

Users can still opt to see these tweets by clicking the “View” button next to the warning, however. 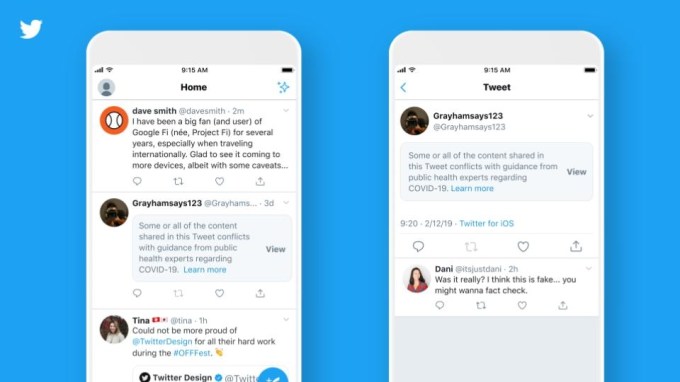 The system of labeling tweets in this way is something Twitter had already developed for labeling tweets containing synthetic and manipulated media, like “deepfake” videos. Meanwhile, the company in March had expanded its definition of harm to include content that directly contradicts the guidance from authoritative sources of global and local health information.

That gave it permission to remove content it believed could risk people’s health and well-being as well as the ability to add the “public interest notice” to tweets posted by world leaders that would otherwise have violated its COVID-19 guidelines.

However, Twitter’s use of labels and warnings with COVID-19 disinformation seems to have been more hurriedly rolled out, following the spread of a new conspiracy video about COVID-19. The video comes from a well-known vaccine conspiracist, discredited scientist and fired researcher-turned-book author. Its high production values and tone of gravity have easily convinced some of its validity, leading to its rapid spread across social media.

On Friday, Twitter said it would assess individual clips from the video to determine if they’re in violation of its rules. It said it would add a warning label to any tweets with links that point to the full video. Twitter also clarified that it’s not taking down tweets with the links because many people are using them when disputing the content.

Today’s news indicates that Twitter is formalizing its decision around the viral video to include any other COVID-19 disinformation, as well. 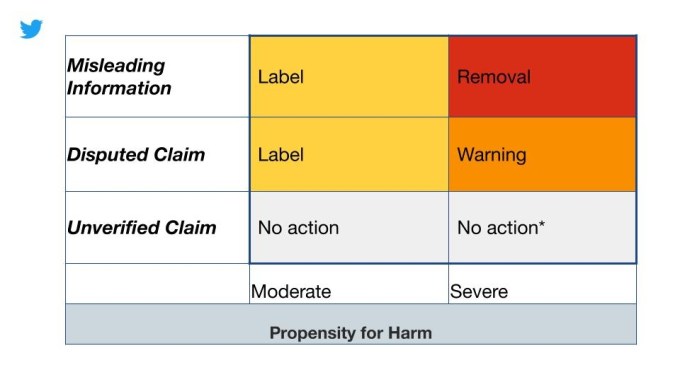 Twitter didn’t fully detail how it determines how tweets are caught and labeled, but shared a chart that shows how which tweets get a label versus a warning, or have no action taken.

“Our teams are using and improving on internal systems to proactively monitor content related to COVID-19,” the company explained in an announcement. “These systems help ensure we’re not amplifying Tweets with these warnings or labels and detecting the high-visibility content quickly. Additionally, we’ll continue to rely on trusted partners to identify content that is likely to result in offline harm. Given the dynamic situation, we will prioritize review and labeling of content that could lead to increased exposure or transmission,” said Twitter.

The system may also evolve over time with new labels being added, Twitter noted.

Microsoft founder Bill Gates is no longer a bitcoin bear. He has now taken a neutral stanc…